It’s the mid 80’s and an awkward lanky lad is strumming away in the music block at high school in a small Norfolk town, he’s escaping the bullies and the playground lunchtime lynchings. Over the din a teacher strolls in and looks at the lad and says “Watson! If I were you, I’d give up on music. You’ll get nowhere.”

Imagine a teenager in this East Anglian outpost of the UK, more than a little obsessed with music ever since seeing Kate Bush swiftly followed by the mighty Slade on Top Of The Pops as a kid, is neatly tearing the latest image of one of his favourite bands out of the NME and sticking it on his wall (in this case Miles Hunt in that now famous tartan suit among a wallpapering of images, posters and gig ads) not really ever thinking one day he would share the stage with, let alone get encouragement from that very person on his bedroom wall. Those remarks from that teacher were still echoing loudly in his ears so why would he have thought that?


So fast forward to 2007. The internet has changed the music landscape, those NME cuttings are replaced by “Follow’s and Likes” the Melody Maker and many similar publications have gone, the NME is soon to become a free giveaway at HMV and this music obsessed now adult and part time musician decides to write to the aforementioned tartan wearing Miles Hunt (The Wonder Stuff) a message on MySpace (Remember that?!) I was asking why he hadn’t played an acoustic show here in Norwich and how we’d love to see him play locally.
I admit much to my surprise he promptly replied and said ” Yeh. Sort me one out.” Well what would you do? So myself and the band I was in at the time (Huck) did just that and we played a show with Miles and Erica (The Wonder Stuff violinist) at Norwich Arts Centre.

And so began, a now ten years and counting journey, I hadn’t in my wildest dreams expected would happen to some schmuck like me from this little but beautiful city. “You’ll get nowhere…” said Mr Brown. Yeh we’ll see…

That band I was in at the time was Huck. We did alright and even opened for Billy Bragg and Jamelia of all people at our local football stadium, slots with Scouting For Girls and The Undertones were had. We garnered quite a following and trecked up and down the A11 playing in London (One particularly memorable gig at the Hope &a Anchor in Islington found pop starlet of the time Dido in the audience) and local venues and Festivals wherever we could. We did well. We all liked one another. It was an exciting time to be in a band the local (and still fervent) scene was friendly and we had a great time. We were “Successful” in our own little way. Not fame and fortune successful but I guess that all depends on your point of view. We did good.

However, I quit the band in 2012. And as much as I loved the guys I was with in that band with Glyn, Allan and Giles. I wanted to do something new.


I’d met up with Miles Hunt at further gigs when he or The Wonder Stuff were nearby and I remember vividly him telling me during one particular conversation outside the cold damp concrete clad UEA LCR Venue to go and play some open mic’s and encouraged me to go make a record and all I needed was a mic, a laptop and some recording software.

This suggestion was duly noted and I did just that with a little help from my childhood mate and now Canada based whizkid studio/sound engineer Vid Cousins, who somehow made sense of these homemade recordings mixing them for me into what became my first record “Grounded” As you’ll probably know that record also featured Erica Nockalls beautiful string arrangement on the title track. Erica who’d I’d met of course alongside Miles back in 2007. And local Country singer Sam Coe sang on a couple of tracks too contributing to my first ballad “If you decide to leave”.

The “Grounded” Promo Video. I lost days drawing and animating this little stop motion film. Worth it though I’m sure you’ll agree. I believe the ‘Erica puppet’ now resides in her art studio after I framed it and gave it to her.

I put out that record through crowdfunding platform Pledge Music in early 2014. So many people, too many to name here granted me the gift of getting that record out there. I will never be able to say thanks enough! I’d been made redundant by this point from my job of 20 years and my partner Claire had suffered some serious life changing health problems, so life was/is a bitter sweet one. She has however always been my rock and supported my folly of making music, unshaken by what life has thrown at her.

One of hundreds of CD’s I had to sign before posting out! Photography by the super talented photographer and Norwich Music Blogger Richard Shashamane. 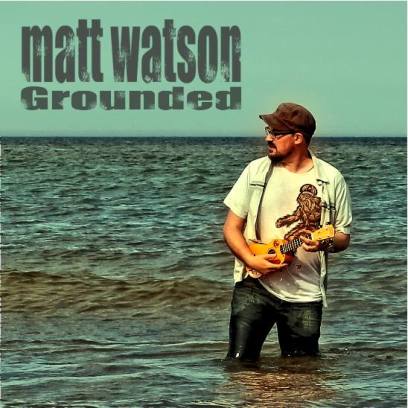 All the time of course I was gigging, some great support slots came up along the way with Miles & Erica, Julian Cope and many more.

Ian Prowse of Amsterdam/Pele was another one those acts I decided to write to about sorting a gig here in Norwich. Pele never came this way back in the 90’s but I’d seen Ian with his band Amsterdam supporting The Wonder Stuff in 2006 at The Waterfront and was mightily impressed but I hadn’t made the connection between them and Pele at the time! I’d loved Pele’s early string of singles after seeing “Fireworks” on The Chart Show in the early 90s.  When I was in Huck, Pele’s name came up a lot in radio interviews as they were the only other band they could think of named after a footballer (We named ourselves after Norwich Striker and hero Darren Huckerby)

A small self funded UK tour in 2015 took place playing to varied sizes of audiences from two to full houses. A gig with Amsterdam in Dumfries after the longest of train journeys was a highlight.
I ended up gigging with Ian Prowse again in of all places my friend and big Prowsey fan Kathryn Wiseman’s living room. Celebrating a landmark Birthday! I joined Ian for “Does This Train Stop In Merseyside?” and “Raid The Palace” and if memory serves me right Teenage Kicks!

Check out this short documentary about 25 years of Pele here:

Ian like Miles and Erica have always shown me the utmost support and encouragement and for that I can’t thank them all enough.

So came record two, made partly at home and partly in a local studio NRSix run by the brilliant Justin Brand who lent me his studio and helped engineer stuff out of sheer goodwill and again I was pinching myself at the kindest of gestures to help me. 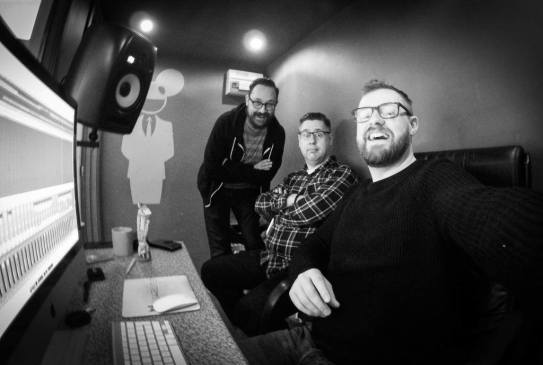 Me, Giles and Justin

Some of the Endless Shipwreck crew!

We even made a ‘Studio Diary; Making of video!

I’d also written to Mark Freegard a producer/mixer I’d always admired as he’d worked on many records I’ve loved all my life and was blown away when he also agreed to work on the record. Mark has worked with Del Amitri, The Manic Street Preachers, Marillion, The Breeders to name just a few. Mark is fantastic guy who has encouraged and mentored me along the way and continues to do so now with enthusiasm and a clear passion for music.
And so was born “The Endless Shipwreck” a record I am enormously proud of.

You can hear or even buy or download a copy of both my albums HERE.

The amazing artwork was created by local artist and printer Vicki Johnson.


The record again featured Erica on fiddle but also a cast of amazing local musicians Mark Howes, Andy John Keates, Giles Wakely, Ian Harvey, Kate Ross, Mark David Nash for his spoken word piece. A cast of great people whose contribution made all the difference. Again this was made possible by all the souls who were involved and the cast of hundreds who again crowdfunded it’s release. Many of them even helped make a video for “Let’s Jump Ship” thats not my song anymore, it’s theirs.

The “Let’s Jump Ship” Fan made promo. Look out for cameos from Erica and comedian Mark Watson…!

Then the height of ambition came true for me when thanks to comedian Robin Ince I was played on BBC Radio 6 once again this time by Steve Lamacq! Yes Steve Lamacq!!! “Let’s Jump Ship” leapt out of my stereo after Mr Lamacq loquaciously said my name. Praise indeed. Thanks Robin.

After all that earlier this year I then decided to walk the East Anglian Coastline and play some gigs along the way for charity! What could go wrong? It was only a 134 miles or so!!! Something I’ve always wanted to do. I love the outdoors and walking it seemed to make sense to me to join these passions together. I loved it and the support was overwhelming. I raised £1.500 to be split between the RNLI, Nelsons Journey and Change of scene for Children and Animals.

The trip was in part supported by the amazing guys at Margins Walk and Glamp. Gin and Mark were just amazing supporting and helping organise my Norfolk Coast leg of this mad endeavour! Thanks guys your amazing. 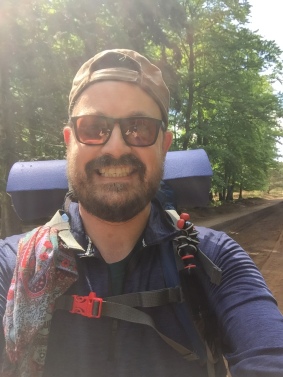 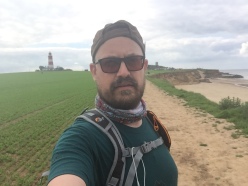 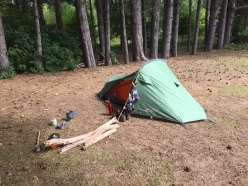 I’ve not even begun to mention the local radio support and local media who all had a massive part to play in this mad old life of mine. Thanks to all you too!!!!!
I am lucky bloke and what I’ve done to deserve it I don’t know, but whatever it may be I’m lucky.

Without local BBC Radio and community Radio like the wonderful Future Radio getting heard would be so much harder! Steven Bumfrey, Thordis Fridrikson,Nick Conrad at BBC Norfolk. Sam Day, Richard Penguin and Mark Thorpe at Future Radio. Si and Zoe at the now sadly finished Mustard TV. Thank you! 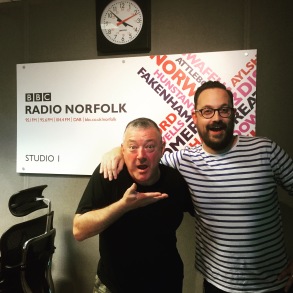 Filming with the guys from MustardTV

I am richer than I could ever have imagined with experience and friendships and music, not money and stuff, but a heart full of life.
Long may it continue.

Good news is, even though this has been another bitter sweet year for me I’ve finished recording a third record and hope I can find a way to get that one out in the early part of 2018. Mark Freegard is tirelessly helping make that possible again and with help again from a couple of musical friends Mark Howes, Yve Mary Barwood and SkinnyBoy Tunes. I can’t wait to share it with you all soon.

Here’s a DEMO from the forthcoming album as a teaser: “Outside (Looking In)

And so here we are bang up to date and looking at my last gig of 2017 which will be with my pal Ian Prowse at Epic Studios. See you at the front?!

Here’s to the next ten years eh?

View all posts by mattwatsonmusic

1 thought on “When I was at school a teacher told me to give up on music. You’ll get nowhere he said…”

Just had the most brilliant online zoom call open mic/in the round session with others from @wearewaterbear this evening. Really great to see and more importantly hear each other perform. Technology can at this kind of time be a most positive addition to this er.. Modern (the new norm?or whatever it is) life. Make phone calls, send texts Zoom, Skype, FaceTime and Insta and Facebook live one another. Most of all KEEP TALKING, SINGING AND DANCING! 🕺🕺🕺 Made me feel a 100% better . 🎶 ✊🤘❤️ Stay safe you're all awesome. X #wearewaterbear #resilience #community #singersongwriter #independentartist #diymusician #newmusic #musicdegree
We both need a haircut! Ain't gonna happen for a while though is it? ! 😂🤷‍♂️🐶
%d bloggers like this: